Every now and then, I get the pleasure of baking a cake for a special occasion, and I like to attempt something layered and out of the ordinary. My sister’s birthday gave me an opportunity.  I wanted to make a mint and chocolate creation.

While looking for recipes, I found one that talked about having two kinds of batter and dropping them in to make a marbled, splotchy effect.  I thought this would tickle my sister.  So, I made cake batter, divided it into two bowls and prepared to add mint flavouring and green food colouring to the one half.  There was one small problem.  After searching through mom’s many bottles of flavouring like caramel, coconut, banana, vanilla, rum, maple, and lemon, I realized that we did not have mint flavouring.  What else could I do?

I decided lemon and chocolate might be all right.  I pulled out the lemon flavouring and started scrounging for yellow food colouring.  The closest I found was a yellow green.  Should I just leave the batter the creamy colour it was naturally?  Should I colour it orange or green and pretend it was a different kind of citrus? I decided to add the yellow food colouring and hope that with the yellowish tinge of the batter, it would work out all right.  It did.  I added lemon flavouring, lemon juice, and grated lemon until the batter was lemony enough.

Then, I turned to the chocolate batter.  I searched every shelf of the pantry for cocoa and found none.  I checked the cupboard, too.  There appeared to be nothing but spices and those many bottles of flavouring and food colouring.  Well, how much chocolate milk powder would it take to make it chocolaty enough? Should I melt baker’s chocolate and add that too?  In a desperate last effort, I dug out the container of spices in the cupboard and beheld two containers of cocoa, not where I expected them.  I added it to the second section of batter and made sure both batters weren’t too thin by adding flour.

Then, I scooped it into the pans, varying the colours and put them into the heated oven, and for all the hair I nearly lost, they came out golden and beautiful.

Next the filling dilemma came. I had seen a recipe for a cooked filling that, as I recalled, had melted chocolate in it. I cooked the milk, sugar, vanilla, butter, and flour.  Then I panicked. Clearly, this filling wasn’t chocolate. I studied the ingredients list. No chocolate.  How much cocoa should I add? Would the filling be thick enough? I dumped and stirred and cooked some more, until I had a chocolate coloured filling made with cocoa.  I read over the recipe one last time.  Sure enough, at the end of the instructions, it said to stir in melted chocolate.

Lesson learned.  When it doubt, do not panic, read the instructions carefully. 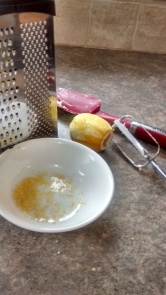 Filling inserted between the two cakes, I turned to the icing. Remember, I didn’t have any yellow food colouring.  I could have made it chocolate, but I didn’t really want to.  I remember that there was a tube of mustard yellow decorator’s icing in the cupboard. I made white icing and iced the sides.  Then, I added yellow gradually to make the icing more and more yellow.  Of course, I made too little icing to start.  So, I needed to make more, and I had icing sugar dusted over almost everything.

However, when I got done, it didn’t look half bad, if I may say so myself.  It tasted good, although it was a little more solid than some cakes.  That just meant it lasted a little longer. 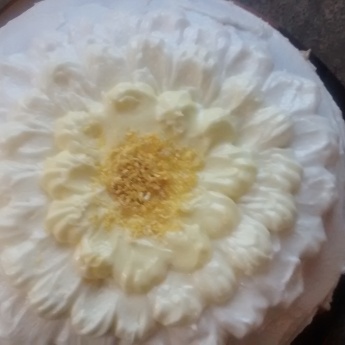 “Piece of cake” is supposed to mean easy to do.  Whoever coined that phrase must have been eating the cake, not making it. The next time you press your fork into a lovely, layered, delectable slice of cake, take time to thank the baker as you enjoy one of God’s “simple” pleasures—a piece of cake.

← The Miracle That Is
Dusty Hands →

4 Comments on “Piece of Cake”

*These dates may flex some. Sign up by e-mail if you don’t want to miss a post.

If you would like to comment or ask a question without it being public, e-mail me: travelight94@gmail.com