Privilege of a Scribe 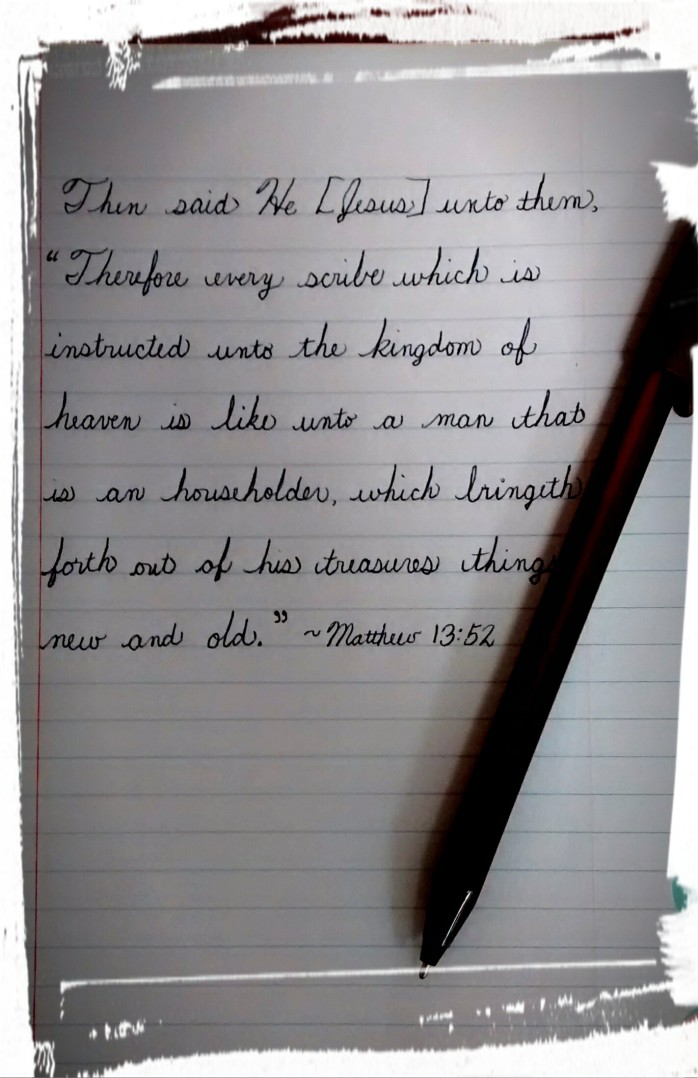 I found it tagged on to the end of Jesus’ parables of the kingdom, words from the Word in a verse I’ve read often–but never seen until now.  Ironically, this is a shadow of its message.

Raised in an Anabaptist, Bible-following, church-going family,  I have been instructed in the Kingdom.  Accepting Jesus as my Saviour and reading the Word puts me under the tutelage of the greatest teacher.  God has given me writing as a tool to build the Kingdom.  What an awesome privilege to be able to inscribe treasures in ink!

“A word fitly spoken is like apples of gold in pictures of silver.” Proverbs 25:11

Yet, am I really a scribe?  The word brings visions of aged men in beards furiously copying the books of the law, making scrolls of what they were told to write.  Even with the beards and scrolls aside,  how can I be a scribe?  I write original work.  I write what I want to write in my unique voice.  I’m not merely copying another’s work.

Isn’t this where we so often err.  No writer is not a scribe.  We write the message God calls us to write or default to the self-serving, Satan script.   Whose message do I write?

Yes, what comes through me is original.  Everything God does is.  He brings the truth of old, established before the foundation of the world and presents it in a new voice, through me.   Satan can only copy.  God spoke the world into being, and Satan tempted Eve through spoken questions, using the serpent and tree God created.   God dictated His story to scribes and Satan tells many to write lies.

God, help me to write Your message and thank-You for using me when I so often fail You.

I have the awesome privilege to be God’s scribe, but this is not the only tool God gives to build the Kingdom.   My mother is a talented seamstress.  She has had the privilege of sewing for her family, teaching sewing to a lonely woman needing a friend, and crafting little dresses to send to third-world countries.  My father is a carpenter.   He has used this tool to support his family, help his siblings and friends with house repairs,  build and maintain churches, and serve as a maintenance man in a third-world country.

I have been given the privilege of a scribe.  What is your privilege?

If you would like to comment or ask a question without it being public, e-mail me: travelight94@gmail.com